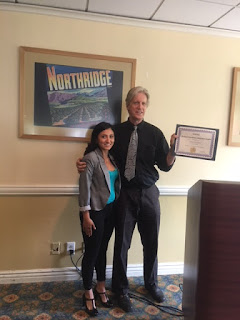 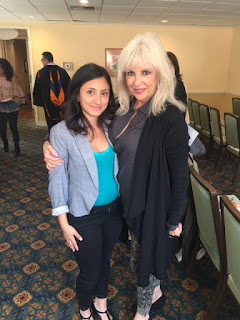 
Posted by Linda Rader Overman at 9:29 PM No comments: 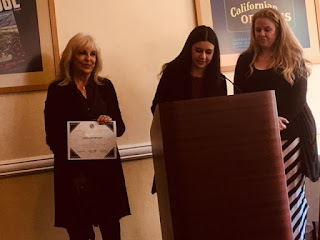 Thanks to my CSUN English 495 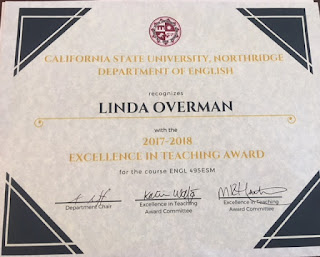 Multi Genre Literacy in a Global Context Fall 2017 students for this award.  I am humbled by it because it is always an honor to teach future secondary school teachers of English. I learn so much from you all and know that you shall inspire your own students similarly. 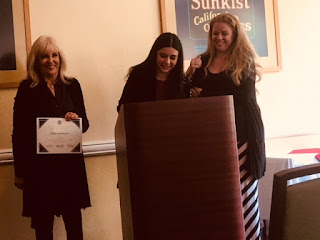 Posted by Linda Rader Overman at 6:07 PM No comments:

Listening to Holocaust survivor, Dr. Henry Oster, and his co-author Dexter Ford is a new experience every single time they do me the honor of speaking to my students in the CSUN English Dept. 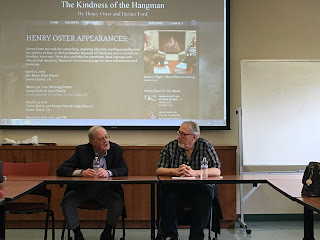 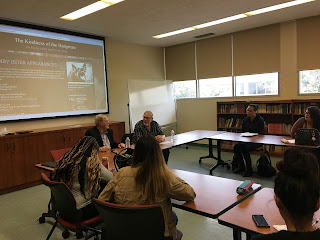 "Henry Oster has told his compelling, inspiring life story, battling prejudice and the politics of fear, at the Los Angeles Museum of Tolerance once a month, on Sundays, since 1977" and in his raw memoir The Kindess of the Hangman he details how he "hid his mother from the SS in an attic in the Lodz, Poland Ghetto. He escaped a firing squad in Auschwitz. Endured a death march through the Polish winter. Formed a life-long friendship in the nightmare barracks of the Buchenwald concentration camp. Saw his friends killed by a British fighter-bomber. And came within hours of starving to death before his liberation by General Patton's 3rd Army."

This collaboration of oral history and organic narrative I-feel-like-I-am-there-with-you-Henry work of pain, agony, loss, salvation, success, and memory remains profound no matter how often I assign the book to my literature students.  Whenever these fascinating men come to discuss the genesis of their gut wrenching text, its writing process, and the outcome of such a poignant work--my students are all the better for it.
With the utmost gratitude I thank you again, Dexter and Henry.  I am forever humbled by the gift you give. We all are. 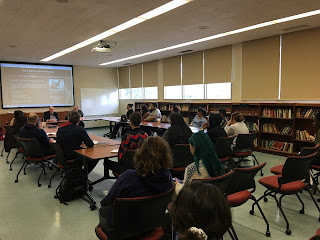 Holocaust survivors who tell their stories so that we shall never forget are disappearing all too quickly.  There are still many who have not told them, but Henry Oster has and continues to SPEAK.  His words are a gift to history and posterity--a gift we must never take for granted. In November he will turn 90. As long as the universe enables us to listen, we always will.  We better!!!!!
Posted by Linda Rader Overman at 3:35 PM No comments:

Posted by Linda Rader Overman at 10:21 PM No comments: