Linda Rader Overman is so proud of the work her son is doing with a large contingent of collaborators: 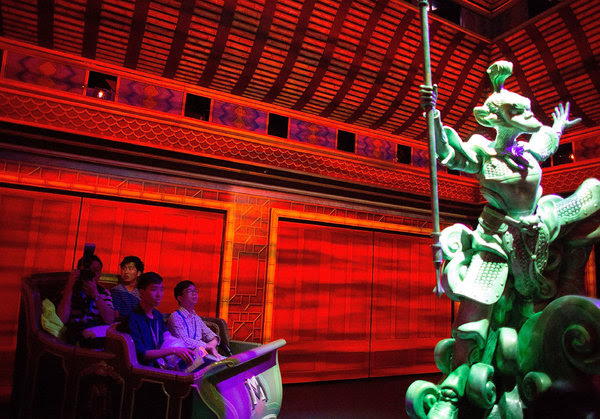 Lam Yik Fei/Getty Images
The Mystic Point ride is a twist on the famed Haunted Mansion and now operates at Hong Kong Disneyland.

By BROOKS BARNES and KEITH BRADSHER

HONG KONG — Iron Man has proved his might at the Chinese box office. Now Disney is betting that the Marvel superhero has enough muscle to complete a turnaround at its underperforming theme park here — a task of crucial importance as the company hurtles toward the opening of a mega-resort in Shanghai.

[click title link above for more....]
Posted by Linda Rader Overman at 11:27 PM No comments:

TRAVELS (and more) WITH CECILIA BRAINARD: Back to Novel Writing with Eve La Salle Caram and her group!

Everyone needs a community, especially writers slaving away in isolation trying to get blood to flow out of cement. So I am honored to have my community of writers for support!

TRAVELS (and more) WITH CECILIA BRAINARD: Back to Novel Writing with Eve La Salle Caram and her group!

Posted by Linda Rader Overman at 7:14 AM No comments:

In Protest: the Shifting Paradigms of Collective Social Action

C.K. and Teresa Tseng Gallery
Opening reception, September 17, 2013  6:00 P.M.
Featured speakers
Robin Abcarian, columnist for the Los Angeles Times
Richard Abcarian, CSUN emeritus professor, author, and protest movement activist
Collective social action movements, whether spontaneous expressions of dissent or high-reaching attempts to change society, have been a part of American life since the nation’s earliest days. Protest actions, in the form of boycotts, demonstrations, riots, property destruction, occupations, labor strikes, local activism, or works of art, have spanned the political spectrum, defined generations, and shaped our uniquely American identity. We invite you to view items from the Oviatt Library’s Special Collections and Archives that document dozens of distinct and significant social action movements over the course of the 20th century.
For more information, and images from the exhibition please check out our In Protest: The Shifting Paradigms of Collective Social Action exhibition gallery page.
Sponsored by the Friends of the Oviatt Library.

http://library.csun.edu/blogs/goingson/in-protest/
Posted by Linda Rader Overman at 6:19 PM No comments:

English Majors ARE definitely back in demand!

Read this and consider majoring in English even if you thought it was not a good idea.  It is!!

"English majors, once disdained, back in demand" by Dean Rader (via sfchronicle.com)

Director Joyce Jenkins of Poetry Flash has stacks of books to review at the office in Berkeley, Calif., on Thursday, September 27, 2012.

A rarity has occurred - the English major is being debated in the press. We're all so surprised we don't really know what to do. It's a little like meeting your favorite author: You feel both anticipation and dread.
It all began back in October 2012 when the Wall Street Journal ran a story in which Santosh Jayaram, a wildly successful Silicon Valley entrepreneur, praised English majors for their ability to construct stories about products or companies. He even uttered the words: "English majors are exactly the people I'm looking for."

Wow.
But that just got things started.
In late June, columnist David Brooks addressed the decline in the number of undergraduates majoring in English and the humanities in an opinion piece in the New York Times, calling for employers and students to rethink English as an important and valuable area of study.
Two days later, Steve Strauss wrote a piece for the Huffington Post on why he loves to hire English majors. Shared 8,300 times and "liked" by 34, 776, Strauss' essay was an English department chair's dream come true.
Then, just last month, Jordan Weissman wrote an interesting piece for the Atlantic Monthly on the favorable employment numbers for English and humanities graduates.
These pieces make the future look bright for students of English, but the question is, as college tuition gets more expensive and as jobs get scarcer and more complex, is English a smart major in the long run?
I think so.
English majors possess two competencies that are difficult to quantify but highly sought by employers. The first I often describe as the "content/connotation/culture facility." By this I mean the ability to acquire and make sense of structure and story while also paying attention to how that story is told as well as the cultural and historical values communicated in a literary text.
When someone spends four years reading, writing about and talking about complicated, nuanced texts, a kind of interpretive stacking occurs that enables a student (or an employee) to navigate the noise surrounding a document and pay attention both to what it's saying and (perhaps more important) to what it's doing.
Virtually no text is culture-free or value-free. Everything communicates more than what it says. Students of English and literary studies are trained to pick up on things like tone, metaphor, implication, intentionality, hesitation, argumentation and valuation - which can be, quite literally, a deal-maker or a deal-breaker. I see this fluency in my wife, who was an English major at the University of Chicago and is now a vice president of a Fortune 500 company.
English majors also tend to be good at what I call "deep decoding," which has less to do with plunging into an author's work and more to do with versatility. One of the great aspects of studying literature is learning the traits of various genres. Literary study is unique in this regard.
Reading a novel is a lot different from reading a sonnet, which is a lot different from reading a play, which is a lot different from reading an autobiographical essay, which is a lot different from reading 12 essays about Wallace Stevens' poetry. Each genre has its own rules, its own histories, its own techniques, its own codes. In short, each genre is a system, and an English major must be proficient in all of these systems. In essence, English majors are the original cross-platformers.
But this is my perspective. What do our alumni think? I e-mailed several University of San Francisco English graduates and asked them if their degrees had prepped them for their chosen careers. The response was beyond encouraging, and I've decided to post them on our departmental website. Two are worth including here:
Shelley Lindgren seems an unlikely English major. In 2009, she was voted "best wine director" by San Francisco magazine and "best new sommelier" by Wine & Spirits and made the cut for the "top 10 sommeliers" by Bloomberg Markets.
For Shelley, her training in English was about exploration and articulation: "My incessant focus on wine and food in my papers and class discussions must have bewildered many a professor, but I learned so much that I'm able to use to this very day in my classes, cookbooks and interactions with guests at the restaurants. More importantly, what I discovered about myself through all the reading and writing exercises gave me the confidence to pursue a hospitality career and follow my dreams."
One of my first students at USF, Chas Lacaillade, went on to business school at the University of Southern California and works in the entertainment field in Los Angeles.
"Being an English major," he writes, "taught me to explore the origin and results of thoughts and actions and not just respond to information as it presented. I also learned the importance of context and how to construct an argument or idea effectively." That is a good example of the content/connotation/culture facility I mentioned above.
Of course, English isn't for everyone, and it won't guarantee you a job upon graduation, like a major in accounting might. But, with people switching jobs every few years now, I can think of no degree more versatile or more interesting. I also believe that studying English makes you a smarter reader of the world. And as the world becomes more saturated with information, literacy (in all its forms) is the most employable skill around.


Dean Rader is chair of the English department at the University of San Francisco. To read more of his work, visit deanrader.com.  To comment, go to www.sfgate.com/submissions/

Posted by Linda Rader Overman at 1:13 PM No comments:

Disney princesses are bad asses after all, how refreshing

Is Nilsson suggesting that, maybe, society should redefine the meaning of princess --at least
Disney's definition as so many little girls wait anxiously to travel to Disneyland to meet them, dress like them, sound like them, how about shoot like them a la Herr Nisson style. "[H]e depicts cute little characters who are disturbingly comfortable with the nasty realities of the cruel world."

Maybe if women were taught to be cautious and carry a big stick, aka self defense weapon learned in a proper class setting by a trained professional--Prince Charming with a license to carry and a willingness to empower women rather than subjugate them as the fairy tales espouse, would there be as much violence around the globe against women?

Classes in princess Disney style self defense are called for ....be beauteous but trust carefully and know how to aim right where it counts.
Posted by Linda Rader Overman at 6:10 PM 2 comments:

Please have a heart and click the heart on my daughter Deva's photo link below....Vanity Fair Magazine is having a contest for best dressed and Deva Overman's photo is aleady on the Most Popular link! So the more like votes the better chances of her winning or making runner up!  Thanks so much to all.

Vote for LIKE my daughter Deva in the Vanity Fair Magazine

This whole contest is a sham....my daughter had over 12,000 likes on her photograph which was under the Most Popular link and suddenly it was taken down.  I emailed VF and was told over two weeks later that it was a glitch and oops sorry try again.  I did and they ignored my upload of her photograph.

VF obviously has an agenda and only wants photographs of subjects they have predetermined need to be there.  So please do not participate in this obvious sham of a contest.
Posted by Linda Rader Overman at 2:38 PM No comments:

Email ThisBlogThis!Share to TwitterShare to FacebookShare to Pinterest
Labels: Bumps and grinds of getting around life
Newer Posts Older Posts Home
Subscribe to: Posts (Atom)