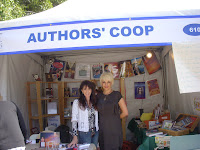 At UCLA on Saturday 4/25 (& Sunday 4/26) Letters Between Us and Linda Rader Overman was thrilled to be part of the Authors' Coop in Booth #610 during LATimes Festival of Books!...The weather was splendid and the dozen or so of us who were privileged to share booth time and sell & sign copies of our books of various genres couldn't have been luckier to be a part of this wonderful event that is a testament to the written and spoken word. Here I am standing with writer Julie Spira who I was happy to meet and discuss our passion for writing with. I was also thrilled to meet writers: Janet Golinger, Linda Ballou, Anne Megowan, and Loren Woodson in person.

The booth was faciliated, gracefully and with class, by poet, Christine Alexanians and writer, Carolyn Howard-Johnson. Many people dropped in to take a look at our displays, ask questions, talk abou

t reading and writing---a favorite subject for all of us---and buy a book and take away a freebie from our collectively donated pile. There were readers walking by who stopped in to purchase a copy of Letters such as Bill and his daughter Danica. Also colleagues and friends stopped by to obtain signed copies of Letters!
Many thanks to Mary Marca, Ren Colantoni, Terri Silverberg and Marsha!

It was an envigorating experience and I 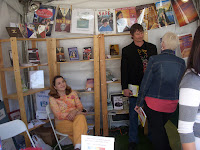 am grateful to have been part of it. 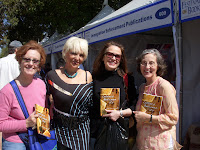 Posted by Linda Rader Overman at 8:02 PM No comments:

Haunted By Her Photograph by Linda Rader Overman


Haunted By Her Photograph
Earlier today, I was sifting through an old photo album. I found it among my mother's possessions, household items cobbled together and sitting in our garage. There among the dusty boxes and cloth-draped antique furniture stood artifacts of a 96 year-long-life lived. Since her death, they have been gathering dust along with their memories. Mother saved over a hundred photo albums capturing images of family and friends, but this particular 3x5 color photo drew my eye immediately. It was something in the background that made me stop and look again and again. In the foreground are two old girlfriends (today they'd be designated as BFFs, I suppose), one I'd worked with at NBC decades ago when my life mattered in behind-the-scenes television, the other I'd known since middle school, but had lost track of. We were barely in our twenties then. I was the photographer, and I snapped this shot in the den of Mother's home, yet I remember little of what we were doing just prior to, and following the snap of the shutter.

The standout photograph in this act of remembering is not the one I was holding in my hand, but the photograph within this photograph. Hanging on the wall just behind one of my BFF's, who is holding a lit cigarette (everyone smoked back in the 1970s), is a black and white portrait of another schoolmate. She, too, was probably in her twenties when this was taken by a professional, but she looks to be about sixteen in this rest-her-cheek-upon-her-hand pose. I can't really make out where she is in this image inside an image, but her hair is long and she is smiling. I have not seen any photographs of her in years.

This picture startled me because this fragile and childlike BFF died long ago. This photograph is also long gone, presumed dead, as I have no memory of where it currently rests. Oddly, after her death, I started writing my epistolary novel Letters Between Us in fits and starts. The idea of losing my girlfriend who shared much of my formative years with me left a gaping hole in my heart back then. Mostly, because I felt as if part of me-that infantile, naïve, silly, curious, giggly and gangly child that I was, died with her. As we grew, we discontinued our communication, which often happens to old friends, so when I learned of her passing, I did not believe it. I thought it was a mistake. I knew she had been ill, on and off, for several years. Sadly, that illness ultimately took her away from her loved ones. It was nobody's fault.

Her death caused a gap in my life; she was an absence in my memory as was that part of my adolescence. To revive it, I wrote about those days in the early 1960s, those make-peace-not-war days, those burn-your-bra days, those hell-no-we-won't-go days, and it felt like talking with my long lost friend all over again. The characters in my novel have much of the same passion I had expressed in my youth, yet in no way resemble me or my dead BFF. Curiously, though, while crafting Letters, I found myself feeling those same familiar rebellious feelings I had felt as a young hippy protesting the Vietnam War. Fast forward some forty years: now I am left holding this photograph of her photograph, which brings back her presence in the way seeing a welcoming light guiding me through a foggy passageway might-a light I have chosen to forget. It haunts me.
Posted by Linda Rader Overman at 12:05 AM No comments:

Read my interview on Fascinating Authors Blog....secrets about my novel revealed!
They were very nice to interview me and let me shamelessly self promote
Letters Between Us
Posted by Linda Rader Overman at 4:16 PM No comments: