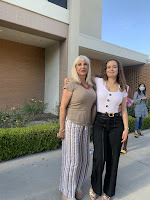 CSUN HONORS CONVOCATION:
Honors Convocation is designed to celebrate a select group of students on the basis of Scholastic or Personal Achievement. Honorees will have received an email invitation as well as a physical invitation which will arrive by US postal around the same time. The ceremony typically lasts about an hour where students are awarded with an Honors Convocation Medallion.

Posted by Linda Rader Overman at 2:00 PM No comments:

A Doctor's "11-Year-Old Patient Was Pregnant. Here's What I Want You To Know About Being 'Pro-Life.'"

My 11-Year-Old Patient Was Pregnant. Here's What I Want You To Know About Being 'Pro-Life.'"Our medical assistant came to me, panicked, and handed me a positive test. ... 'Run it again,' I sputtered — to buy some time and gather my wits and hope by  some miracle it would produce a different result."

One morning this past December, I woke up early to listen to judges with lifetime appointments question lawyers in a process that may ultimately rob people of their reproductive freedom. And week after week since then, I continue to hear judges and lawyers and politicians speak on issues they have no business speaking on ― as far away from people and their real lives as voices from another planet.

During these moments, I think of a little girl in an exam room I met many years ago.

We will call her Sophia.

She was quiet and soft-spoken — a par-for-the-course, awkward adolescent who was uncomfortable interacting with an adult. She answered my questions with one-word responses and didn’t quite know where to look.

When I left the room, I heard the booming voice in my head of an ER doctor who had trained me: “Don’t be the ass who doesn’t order the pregnancy test.” This was one of her clinical teaching pearls: Many young docs will order the blood tests, the ultrasound, the CT scans, but skip the most obvious, most basic test and spend tens of thousands of dollars to work up a patient when the “diagnosis” is actually pregnancy.

Hence, don’t be the ass who doesn’t order the pregnancy test. So I ordered it.

A few minutes later, our medical assistant came to me, panicked, and handed me a positive test. “Run it again,” I asked her, agape. She ran it again. Positive. “Run it again,” I sputtered — to buy some time and gather my wits and hope by some miracle it would produce a different result. Positive.

She was my patient. She was 11. She was pregnant.

I sat Sophia’s mom down in another room and quietly explained to her that the pregnancy test came back positive.

I had to repeat myself multiple times in various ways for her to comprehend that Sophia was pregnant. Shock, tears, a cellphone call. Soon a breathless dad showed up, followed by a somber family priest, and then the cops. I remember the adults weeping in a prayer circle in a separate room and the feeling of watching a nightmare unfold, and I had to remind myself that, sometimes, the job is bearing witness to the worst day of someone’s life.

I tried in vain to coax the truth of what happened out of Sophia, sitting next to her with a large anatomy atlas flipped open in my lap. She said nothing. I was thankful there was a female police officer that was among the throng at the clinic. It was this officer, when permitted to speak with Sophia, who discovered the identity of the family member that did this awful, unspeakable thing to her. And when the cops left to arrest that relative, they headed to church, because the perpetrator was at choir practice.

I recall my focus ― my clear understanding that my only job was to ensure that I was there to protect my patient. That whatever happened, my job was to make sure that at every moment, Sophia was centered, and her mental and physical health were the priority. To make sure that she could find her way, in the midst of this trauma and unspeakable crime, and that her precious life was protected.

And part of that included a pregnancy termination. We would make certain she had access to it and was able to get it immediately.

There was no question that Sophia’s life mattered and it mattering meant that she would not be forced to give birth at age 11.

And though it might be easier to build consensus around abortion access for an 11-year-old raped by a family member, the truth is that nobody, anywhere, under any circumstance or in any situation should be forced to give birth. Forced birth should never be a reality.

Sophia is in her 20s now. I wonder how she has healed, how she has processed that trauma. Did she get to go to college? Has she been able to trust an intimate partner? Has she been pregnant on her own terms at the time of her choosing? Does she have a child? I can see her wide face and her soft smile in my mind’s eye and I know now, just as I knew then, that the decision to terminate Sophia’s pregnancy, supported by the ones who loved her the most, was a pro-life decision.

One of the things my mind conjures up from that horrible day is the feeling that the clinic was crowded. There was Sophia, her mom, then her dad and the priest, and later the cops. There was the crying and the praying and the disbelieving and the believing. I remember how small Sophia looked. Her small face and her small hands and her small hips and how this big, awful thing could happen to someone so small took the wind out of the place.

I remember how tiny that clinic room felt. There was no room for politicians signing evil bills flanked by child props as old as Sophia, no room for Supreme Court justices who claim to value life while wondering aloud how pregnancy can be an undue burden. No room for those extraneous, unnecessary, useless others in that most intimate of spaces. Our clinic rooms will always be too small for anybody but providers and our patients.

And we will fight for this sacred space, fight for it to be free of cynical politicians and their divisive games. They have never been invited in and we are not about to sit back or stand by while they force their way in.

Note: Names and specific details have been changed to protect the privacy and safety of individuals mentioned in this essay.

Dipti S. Barot is a primary care doctor and freelance writer in the San Francisco Bay Area. You can follow her on Twitter at @diptisbarot.

Posted by Linda Rader Overman at 11:10 AM No comments: