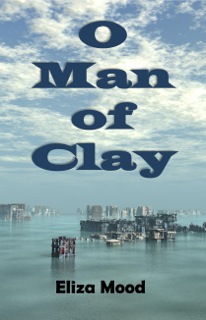 “O Man of Clay’ by Eliza Mood  is published by Stairwell Books. It's founder, Rose Drew, is from Connecticut


O Man of Clay is a CLI-Fi novel
(Climate Fiction or Cli-Fi, is a growing branch of science-fiction literature that deals with the effects of climate change on human society.)


In a fable about climate change set in Hartlepool, most of the world’s major cities have been inundated by rising seas, with a tsunami wiping out the houses, shops and school along Hartlepool shoreline. Seventeen-year-old Zoe, knocked unconscious during the sudden flood, cannot recall her actual name and can only summon flashes of her immediate past. She meets Alma, another young female with a mysterious link to global entrepreneur and opportunist Volk Volkov, himself a refugee: from his past and from a Soviet prison colony. The story, set over only a handful of days, flashes between Volk and Alma’s past and the near-future present. A clever, lighting-fast read about past actions coming back to haunt, and humanity’s imperative to listen to those closest to the earth and the ancestors. (Words by Rose Drew of Stairwell Books)

Info:
A debut climate change novel set in near future Hartlepool, UK. Available from Stairwell Books. An accessible and quirky literary/speculative read on the issue impacting all of us.

Dr. Eliza Mood was my PhD supervisor at University of Cumbria-Lancaster and a wonderful writer in her own right. Congratulations Eliza. Well done!!
Read her interview on Mundos Em Chamas, Worlds on Fire CLI_Fi blog
Posted by Linda Rader Overman at 11:38 PM No comments: