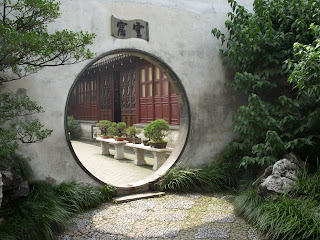 Photograph above is of Master of Nets Garden in Suzhou, China and by traveling there, this doorway compelled me to pass through it so strongly as if the opportunity to enter an enchanted realm would never come again. I did not hesitate.

I spent a week at Shanghai Normal University this past June 2007. I taught two creative writing workshops using image texts to inspire and motivate the students into another kind of writing...and what I showed them was quite a new concept for them.

Teaching 30 graduate students and ...what I found among the students (all English majors) was a strong desire and motivation to learn American English, culture, jargon, idioms and to embrace new kinds of literature.

These students very much wanted also to understand and embrace critical theory. One of the grad students asked me to help her with researching Donald Barthleme...she was mispronouncing his name and was happy that I taught her the correct pronunciation, but the important thing was is that she knew of him and wanted to use him as one of her sources in her thesis.

I later sent her some articles I had found that she could not. The university library at SNU is NOT hooked up to the worldwide web ( I think all of you can understand why considering the intense level of censorship that exists in China)...their internet access is limited...but many of the students find places on campus where there is wireless and then go crazy surfing the web.

I do believe, as my colleague Bob Chianese says, that these students would soak up any lit crit that Bob and the rest of us can teach them. They still are sheltered from much of the global discourse that lit crit engenders within classroom discussion...so this a way to open that door for them. And I am encouraged that Bob can continue this process in the fall 2007 at SNU that you have all begun here at CSUN.

SNU students are very shy about speaking out in class. They are not taught to challenge a professor openly in the classroom either through query or anything else. It is simply not their protocol. What I witnessed and heard from my interaction with grad students (I did not necessarily interact with undergrad mind you) was you do not interrupt nor openly speak out during class time. It would be considered rude and impolite.

So understanding that about these students...they need encouragement from us to be individual thinkers and feel free to engage in discourse through our prompting of such behaviors. Overall these students are under intense pressure there at SNU, and those who come here even more so...their success reflects not just on them and their culture, but their families and the very towns and provinces they come from...some are extemely poor and are priviliged to be at SNU or any university. So their actions reflect their entire community...if they fail they fail their entire community, village, town, etc., and lose face. These are very serious consequences. So there is a lot more to consider here than just teaching literature as a new means of independent thought.
Posted by Linda Rader Overman at 3:33 PM