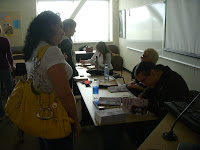 According to the Press Release touting a Butte College Master class on Friday Febrary 27: "Presentations and Q & A session for Linda Rader Overman, Letters Between Us (Plain View Press 2008) epsitolary novel, Zu Vincent, The Lucky Place (Boyds Mills 2008) literary novel, and Bryan Tso Jones, Raking the Hollow Bones (Bedbug Press 2008) poetry occured where each author spoke for about 20 minutes, mixing in readings from their own work with discussions about point of view, storytelling, revisionist mythmaking, structure, character development and inspiration.
Bryan focused on how poets (and fiction writers) reuse old stories and myths, and adapt them to their lives, connecting that larger literary discussion to some of his own poems, 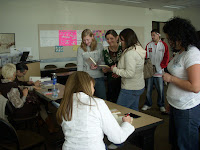 which use Chinese myths.

Linda discussed creating distinct character voices and the epistolary form, along with the necessity to record or journal one's own experience.

Zu used excerpts from her own novel and contrasted them with Joyce Carol Oates' "Where are you going? Where have you been?" to draw attention to how writers use setting, pyschic distance, anticipation, and overall effect (or 'singular effect') in fiction."

After the class, Prof. Kiara Koenig's students stayed for quite a while to chat and get autographed copies of the three different works, which they are required to read in her Intro to Literature and Creative Writing classes. 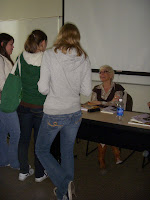 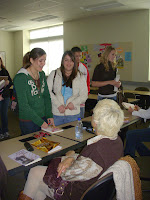 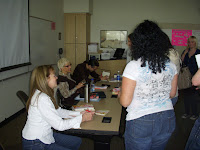